Floods accounted for majority of the 1,058 climate disaster incidents between 1995-2020, while cyclones claimed most lives

India reported a total of 1,058 climatic disasters between 1995 and 2020, a new study found. These events include floods, cyclones, droughts, cold waves and heat waves.

The study by GIZ India attempted the spatio-temporal mapping of climatic and biological disaster outbreaks in India in the past two-and-a-half decades.

The study divided the time between 1995 and 2020 into three periods—pre-Hyogo Framework for Action (HFA) (1995- 2004), which is the the period after Yokohama Strategy for Safer World; HFA, which covers 2005-2014; and post HFA, which includes the Sendai Framework for Disaster Risk Reduction (after 2015). According to the researchers, the periods were chosen as they are marked by new paradigms in disaster management globally and nationally.

What the study found

Of the 1,058 climate disaster incidents, floods topped the list and accounted for 33% of the events. Heat waves came in second at 24% followed by drought (22%), cold waves (16%), and cyclones (5%). The study also traced the temporal patterns of these climate disasters. It found flooding to have decreased by 1% during HFA relative to pre-HFA, while it increased by 2% during the post-HFA period.

However, biological disasters such as Japanese Encephalitis (JE) and dengue have shown an increasing trend in annual average number of incidences across the three periods, the study found. India also recorded one of the highest numbers of COVID-19 cases, the study pointed out.

According to the study, Bihar reported the most floods in the observed time period, followed  by West Bengal, Assam, Manipur and Tripura. Thirty-three out of India’s 36 states and UTs reported droughts between 1995 and 2020. The study found Andhra Pradesh, Telangana and Rajasthan reported droughts more than 15 times, whereas Karnataka, Bihar, Chhattisgarh and Odisha have faced drought more than 10 times. 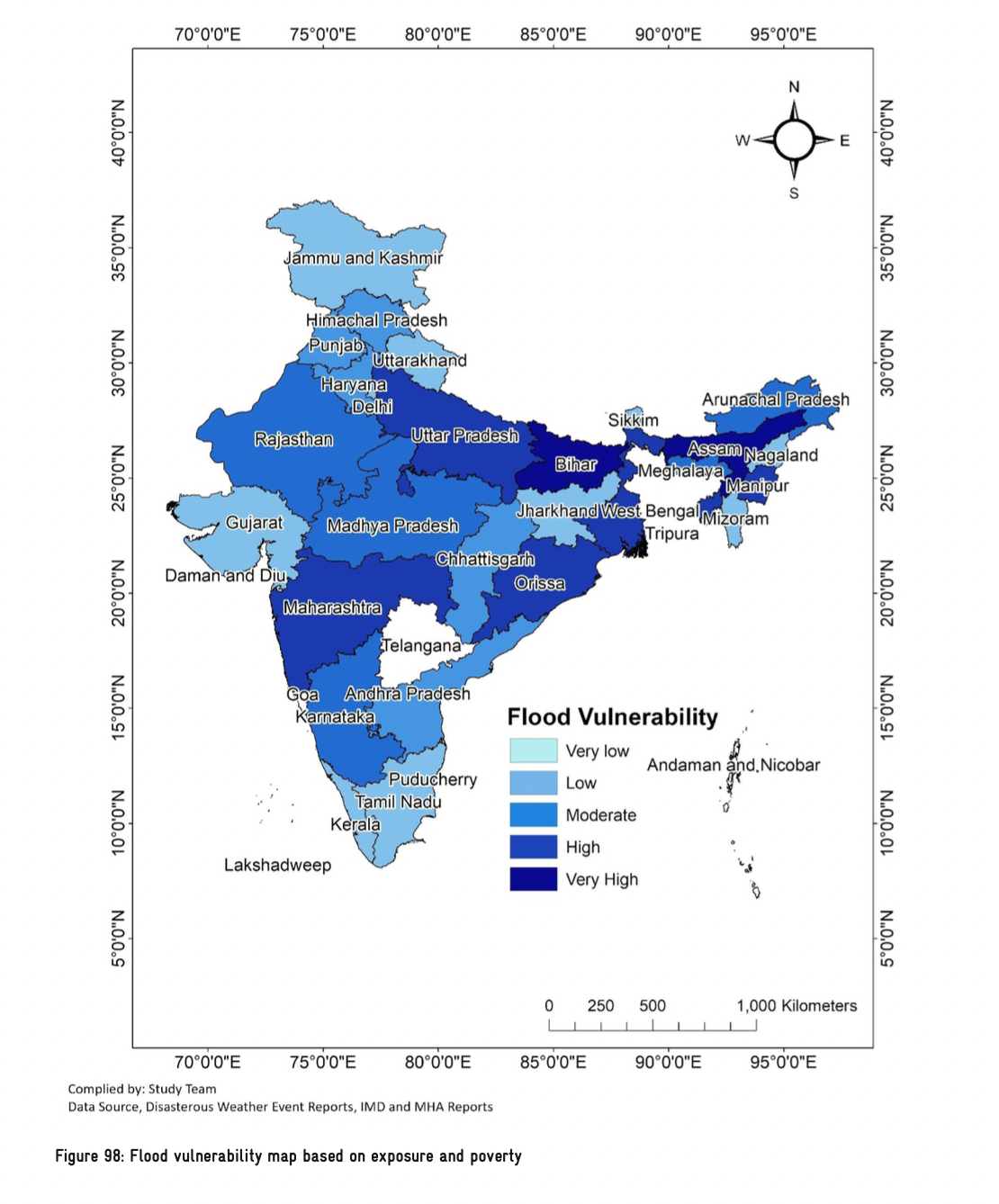 Eleven states reported cyclones, and a majority occurred in the Bay of Bengal area, mostly in Andhra Pradesh, according to the study. While the number of cyclones decreased in Andhra Pradesh, the states of Odisha and Tamil Nadu reported an increase during the post-HFA period, as did Maharashtra.

The study found no significant change in the annual average number of deaths because of flooding across the 25 years that were observed. West Bengal, Uttar Pradesh and Bihar recorded the most number of deaths because of flooding—more than 100 deaths annually. Flood deaths per 100,000 population, however, were highest in Arunachal Pradesh, followed by Himachal Pradesh, Sikkim and Andhra Pradesh, the study stated.

The pre-HFA period recorded the highest mortality rate due to cyclones, largely because of the 1999 Orissa super cyclone. This trend, however, showed a decline in the HFA period, and has been on the rise in the post-HFA period, especially in Tamil Nadu and Maharashtra.

The number of deaths due to heatwaves in most states has been on the rise in the past 25 years, especially in Andhra Pradesh, Uttar Pradesh, Bihar, Maharashtra, Telangana and Jharkhand in the post-HFA period, according to the study. It has, however, reduced significantly in Delhi and Tamil Nadu.

The study found that the post-2015 world has suffered the most because of climate-related disasters. Apart from cyclones that have significantly reduced mortality rates because of the government’s ‘Zero Causality Policy’, which focuses on preparedness, early warning systems and responsiveness, other climate disasters need to be urgently tackled, according to the study.

The report recommended increasing investments in doppler radars, which is likely to activate the zero causality policy for other extreme events such as flooding. The study pointed out the increasing incidents of climate disasters in certain states and recommended government emphasis on mitigation in these regions through projects, schemes and increased allocation in Finance Commission funds.

Climate change will change the country’s water systems, the report stated. In order to tackle this, the report recommended creating databases on frequency and intensity of various climatic disasters at the basin/ watershed scale in order to plan prevention and mitigation actions at the district and state levels.

The study also recommended exchange of information related to disaster response and preparedness across states. For example, Odisha, which has successfully reduced its damage and toll from cyclones over the years can help Maharashtra formulate action plans as the state is likely to see more cyclones in the coming years, the study suggested.