For renewable energy, subsidies have fallen 59% since FY 2017, while for EVs they have grown 205%. Support remains low compared to ambition.

A recent study revealed that renewable energy subsidies in India have fallen by 59% to ₹6,767 crore after peaking at ₹16,312 crore in FY 2017. This was because deployment slowed during COVID-19 pandemic-induced lockdowns and grid-scale solar PV and wind achieved cost parity, the study found. The study also noted that electric vehicle (EV) subsidies have more than tripled since FY 2017 to ₹849 crore in FY 2021.

India’s subsidies for fossil fuels, such as coal, oil and gas, have dropped by 72% to ₹68,226 crore between 2014-21. However, subsidies in FY 2021 are still nine times higher than renewable energy subsidies.

The study, released by the Council on Energy, Environment and Water (CEEW) and the International Institute for Sustainable Development (IISD), found that, overall, India provided more than ₹540,000 crore to support the energy sector in FY 2021, including nearly ₹218,000 crore in the form of subsidies. 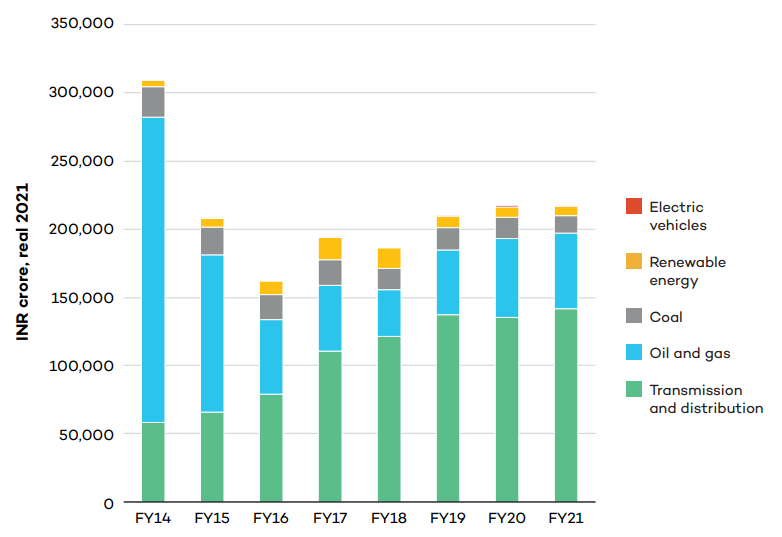 A subsidy break down across energy sectors

The study observed that coal does not require government subsidies because it is a fully established energy technology. Subsidies appear to be driven by a desire to keep electricity affordable.

India faced a power crisis linked to coal shortages in October last year. The study stated that experts found this was due to poor demand projections by distribution companies, high international coal prices, inadequate stockpiling by power plants, and supply disruption due to a longer-than-expected monsoon. Such shortage should not be construed as a case for expanding coal capacity.

As India battles another power crisis and coal shortage, it is considering reopening coal mines. In the budget for FY 2023, plans were announced to support four pilot projects for coal gasification and conversion of coal into chemicals. Such plans, however, emit even higher levels of CO2 than burning coal directly, the study stated.

Oil and gas subsidies have also fallen from ₹2,24,199 crore in FY 2014 to ₹55,250 crore in FY 2021. This is partly due to variation in international crude prices since FY 2014, but also because of fossil fuel subsidy reform, including the removal of diesel and kerosene subsidies.

Major oil and gas subsidies include the lower GST rate of 5% for domestic LPG, against the benchmark rate of 18%, worth ₹14,721 crore and LPG connection subsidies to Pradhan Mantri Ujjwala Yojna (PMUY) beneficiaries worth ₹9,235 crore. In May 2022, India reintroduced LPG subsidies for the beneficiaries of the PMUY scheme in an attempt to target the subsidies to low-income consumers.

While the data above includes only central-level oil and gas subsidies, significant subsidies also exist at the state level. The study stated that fuel subsidies for fishermen and farmers, who use diesel pumps for fishing activities and irrigation have seen a jump of 142%, from ₹304 crore in FY 2016 to ₹736 crore in FY 2019.

While oil and gas subsidies have fallen significantly, 2022 will be a critical year for maintaining existing reforms as the energy crisis became a global concern in response to the war in Ukraine.

As mentioned earlier, renewable energy subsidies have fallen by 59% after peaking in FY 2017. However, the study pointed to several existing policies and new commitments that suggest a rise in subsidies in manufacturing, decentralised renewables, and green hydrogen.

In contrast to renewables, EV subsidies have more than tripled since FY 2017. During the year, India announced a production-linked incentive programme to attract investments in domestic manufacturing of EVs and components. With manufacturing receiving a boost, clean energy financing will be the next step to further scale up deployment.

Among Public finance institutions (PFIs), the study could not identify any data on annual lending for fossil fuel and clean energy due to a lack of data transparency. For power, the three biggest PFIs alone disbursed ₹190,116 crore in FY 2021. Among financial institutions, public sector banks (PSBs) had the lowest outstanding credit for clean energy at only 4.3% of all energy related outstanding credit.

In FY 2021, India’s seven Maharatna public sector undertakings (PSUs) invested 11 times more in fossil projects than RE. The report warned that state-owned energy firms risk lagging behind their private sector counterparts, who are announcing bold plans to capture a share of future clean energy markets. As of early 2022, India has no formal commitments involving the role of PSUs and PFIs in the domestic energy sector.

At COP26, India had committed to take its non-fossil energy capacity to 500 GW by 2030 and to achieve the target of Net Zero by 2070. In August 2021, India surpassed 100 GW of installed renewable energy capacity, excluding large hydro. Currently, India is facing a power crisis and in our previous report, we mentioned the Ministry of New and Renewable Energy is failing to meet the financial requirements needed in meeting the 2022 target of achieving 175 GW.

To achieve the same, the authors of the study recommended public finance institutions to increase the clean energy sector lending targets. The Centre and the states must also ensure adequate support and financing models for clean energy in the medium- and long-term, the study concluded.

#FossilFuels
❌The new Global #Energy Monitor report says that steelmakers are nowhere on the path of #decarbonisation.

🏭They are building more #coal run blast furnace based capacity instead of the comparatively cleaner & greener electric arc furnaces.

That's how those who use EVs in Delhi are benefitting!
If you have an #EV story too, share it with #DrivingGreen 💚🚲🛺🚗🚌